Adapted and directed by Pamela Whalan

Adapted from Jane Austen's novel by Pamela Whalan If you ever thought that Jane Austen wrote pretty little romances in which all live happily ever after, your introduction to the world of Mansfield Park will cause you to revise your opinion! Mansfield Park, written in 1813, draws us into the world of the three Ward sisters: one of whom married well and became Lady Bertram of Mansfield Park; one of whom married to avoid being an old maid and became Mrs Norris, wife of the local parson; and the youngest, who married "to disoblige her family" and became Mrs Price. 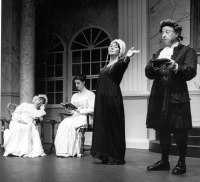 The calm, respectable world of Mansfield Park where Sir Thomas and Lady Bextram reside with their four children and Fanny, eldest daughter of the impoverished Mrs Price, is disrupted by the arrival in the district of the charming but worldly Crawfords. Henry Crawford flirts outrageously with the young women but are his intentions honourable? His sister Mary, beautiful and sophisticated, is attracted to the second son of the family as much as he is attracted to her, but can she resign herself to be the wife of a country parson when she so much enjoys the pleasures of London society? The rash conduct of the young people is observed acutely by poor relation Fanny who is powerless to help, while those who should be guiding and advising are either absent, fussing over trifles, or dozing peacefully by the fire.

The novel has been adapted for the stage by Austen scholar Pamola Whalan, who is also directing this production. She works once more with set and costume designer Peter Henson. You may remember the beautiful set and costumes he provided for Pamela's 2000 production of Emma. This production will be another visual treat. Mansfield Park: a play has its preview on Friday 4 January at 8.00pm, and opens Saturday 5 January at 8.00pm. It runs for a season of Friday and Saturday evenings and Sunday matinees at 4.30pm until Saturday 23 February 2002 at the Genesian Theatre, 420 Kent Street, Sydney. 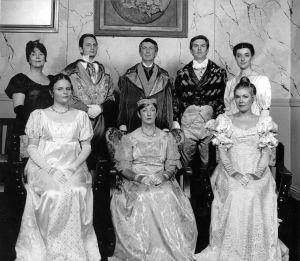