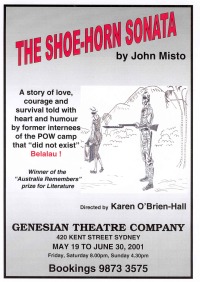 In February 1942, the Japanese Army invaded Singapore and the rest, as they say, is history. But for Bridie Cartwright, Australian Army Nurse and Sheila Richards, 15-year-old English schoolgirl, 13 February, 1942 is written indelibly in their memory when a small voice says "I don't believe we've been introduced". Not a particularly memorable remark, except Sheila is not introducing herself to Bridie in a drawing room, rather they are in the middle of the South China Sea! 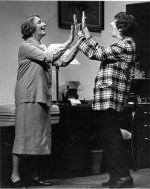 For the next three and one-half years, Army nurses, civilian women and children were Prisoners of War in various camps in Java and Sumatra; camps where no rules seemed to apply and where they faced demanding and appalling challenges. Fifty years after their release, Bridie and Sheila are re-united and relate how they met these challenges. Although Bridie and Sheila are characters, every event in the play occurred between 1942 and 1995. Such is the fabric of "The Shoe-Horn Sonata". 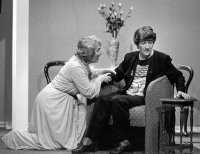 Written in 1995 for "Australia Remembers,`, the 50th Anniversary of Peace, the Genesian Theatre is proud to present The Shoe-Horn Sonata by John Misto, who wrote, "I do not have the power to build a memorial, so I wrote a play instead." A more fitting memorial to these wonderful women could never be sculpted in stone; no piece of marble could relate this story of love, courage and survival with such humour and heart.

Lest We Forget, we have The Shoe-Horn Sonata 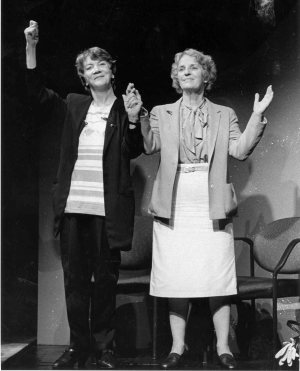