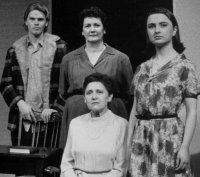 'The Children's Hour', is only one of many successful works by distinguished playwright Lillian Hellman: works which include Watch on the Rhine and The Little Foxes.

First produced in 1934, Miss Hellman reworked the play for her 1952 New York production. It is this reworked script which has been chosen by Director Joyce Birch for the current season; she has however set the play in Australia. 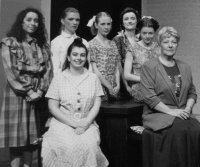 Teachers Martha and Karen run a school for girls in a converted farmhouse in country Victoria. The equilibrium of their lives is shattered when, taking a remark made by Martha's self-centred aunt, student Mary Tilford starts a malicious and unfounded rumour. The rumour turns to scandal and, understanding the power she wields, Mary sticks to her story, even implicating the hapless Rosalie. Although Mrs Tilford, Mary's grandmother, eventually discovers the truth, it is too late to prevent irreparable damage to many lives, including her own.

A strong, dramatic play, The Children's Hour is a touching story of real people, written with a psychological insight which awakens generosity of spirit in its audiences.