A Man For All Seasons

A man who puts his beliefs before his life.

This is the story of Sir Thomas More and his family, a man of temperance and reason who could not, no matter the consequences, deny his deep and abiding faith in his church when his King, Henry VIII th of England, proposed to cut his and his country's ties with the Catholic Church in order to form his own church for his own needs - divorce his wife Catherine to marry Anne Boleyn. 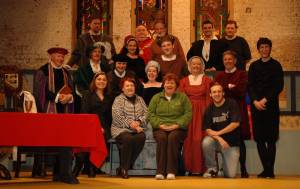