Far From the Madding Crowd

Thomas Hardy's 1874 novel Far From the Madding Crowd was the subject of a popular film last year and we are thrilled to have obtained the rights to Mark Healy's recent stage adaptation for English Touring Theatre. The tale of a head-strong, feisty, yet ultimately compassionate woman and her three suitors, this acclaimed adaptation fuses vivid story-telling, live folk-song, and humour. Don't miss it!

Thomas Hardy's novels were concerned with the lives of country folk and the land. Set at the beginning of the industrial revolution, Far From the Madding Crowd is perhaps foreshadowing the changes and social breakdown of country life in South West England; as the novel creates a sense of nostalgia for the traditional way of life - despite its harshness and hardships. 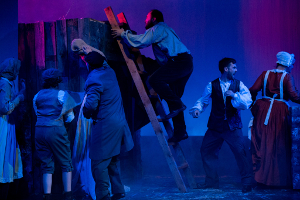 Mark Healy's close adaptation of the narrative was commissioned by the English Touring Theatre in 2008 and toured extensively during that year. Healy recognised that much of early nineteenth century writing tends to be melodramatic, and with so much drama happening within the story he focussed on showing as much of the day-to-day life of the individuals by grounding the play in authentic activities. The Genesian Theatre production features original music for the folk songs and choreography for the country dances. 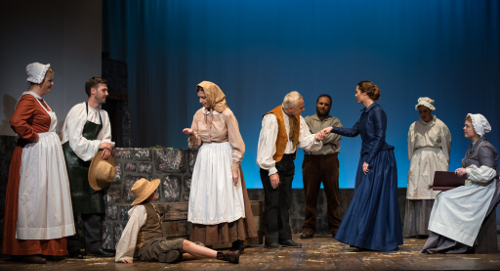 By arrangement with Dominie Drama, on behalf of Nick Hern Books