This is a play that will be enjoyed by lovers of Dickens, all the way through to people who have never even read the book. - Jacky Bailey WeekendNotes

Join the event on Facebook for video interviews, photos, and behind the scenes info about this production.

In celebration of the 200th anniversary of the great man's birth the Genesians are proud to premiere this new adaptation of Charles Dickens' great novel. 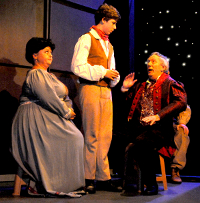 Young orphan Pip lives with his sister and her husband blacksmith Joe Gargery in a humble village when his life is turned upside down by a meeting with an escaped convict and subsequently his introduction to eccentric recluse Miss Havisham and her adopted daughter Estella. As Pip is suddenly removed from his humble origins and transformed into a young gentleman of great expectations he gains much but ultimately realises he has lost himself on the journey.

Dickens' wonderful characters are brought to life by a talented cast of old and new Genesian faces, with detailed period costuming from Peter Henson, in this stunning new adaptation by Roger Gimblett 'Mr Theatre'.

On Saturday 2nd June 2012 the Genesian Theatre donated 50% of all Box Office takings to Carers NSW, the peak organisation for carers in NSW. 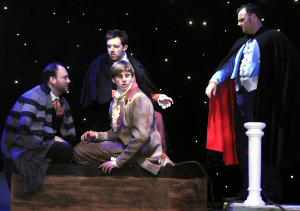