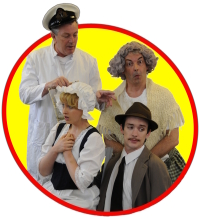 From the novel by John Buchan

From the movie of Alfred Hitchcock


The Genesian Theatre was pleased to donate $2000 in box office takings from the Opening Night of The 39 Steps to the Red Cross to help provide aid to the people affected by the 2011 Tohoku earthquake and tsunami. 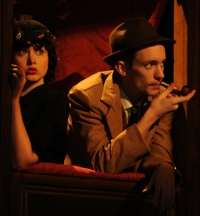 Featured on The Theatre Show! Watch the clip on YouTube.

"Already very funny on opening night, this production can only get even funnier"
Neil Litchfield - Stage Whispers

Alfred Hitchcock's film of John Buchan's classic adventure novel is brought to life on the Genesian stage in this hilarious spoof from Patrick Barlow. Bored colonial Richard Hannay is thrust into the thrilling world of international espionage when the beautiful Annabella dies in his arms, a knife in her back. Suspected of her murder he flees from the police to the Scottish moors on the track of a vicious gang of spies. 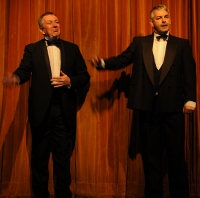 The movie is a thriller, the play is a farce. At face perhaps an apparent contradiction, but of course there is always a very fine line between the two. Crank up the tension of a thriller a notch and it immediately becomes a comedy.

That is largely what makes this play work - Hannay is a little bit more dashing, rugged and handsome, the women he meets are a little bit more beautiful and enticing, the villians even more evil and dastardly. Everything larger than life and theatrical, as after all befits a movie that is placed on stage.

With a very talented cast of four presenting several hundred characters backed up by a highly experienced production team, this fast moving farce is sure to prove hugely entertaining! 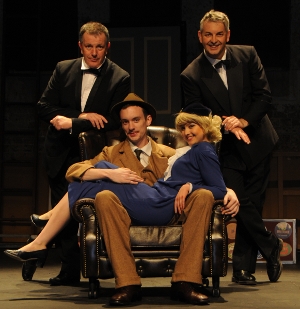