Music by Harvey Schmidt, book and lyrics by Tom Jones 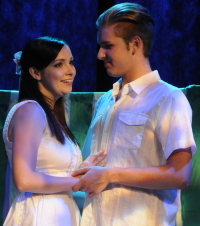 The Genesian Theatre was pleased to donate $1500 to Queensland Flood Relief from ticket sales and donations made on the opening night of The Fantasticks. We were also able to donate a further $500 from a late night cabaret during this production. We thank our audience for their generous support in helping us help those affected by this disaster.

Try to remember a time in September, and follow...

At last the Genesian Theatre is proud to present the longest running musical in history The Fantasticks. Still running in New York where it opened in 1960 this most beautiful musical has won numerous honours and featured some of the worlds most famous performers in its casts over the years including Jerry Orbach, Liza Minnelli, F Murray Abraham and Joel Grey. Loosely based on the play Les Romanesques by Rostand the deceptively simple plot concerns two neighboring fathers who put up a wall between their houses to ensure that their children fall in love, because they know children always do what their parents forbid. After the children do fall in love, they discover their fathers' plot and, disillusioned, they each go off and experience 'the world'. Ultimately, they return to each other and the love they had, having learned from the world and made an informed decision. Elements of the play are drawn from the story of Pyramus and Thisbe, Shakespeare's Romeo and Juliet and A Midsummer Night's Dream as well as Donizetti's L'Elisir d'Amore and Rostand's play.

Hugely funny with some of the most delightful music written for the stage this is your chance to see the show that has become, quite simply, a legend.

"THE PERFECT MUSICAL. IT'S A GEM". The Wall Street Journal

"HEARTFELT. HYPNOTIC. CHARMING. Reminds you why The Fantasticks has touched so many people over so many years." - Michael Kuchwara, Associated Press

"It dawned on me why the performance I attended was packed to capacity: in a world where it's increasingly difficult to find anything to believe in, The Fantasticks reminds us that its sunny outlook is exactly what we all need." - Michael Criscuolo, NYTheatre.com

"THE FANTASTICKS IS A DREAM COME TRUE, A TOTAL JOY. IT WILL DO YOUR HEART GOOD" - Simon Saltzman, CurtainUp

"The show hasn't lost its appeal; it feels like a game of make-believe. The Fantasticks is just like the kind of teen-age love it depicts: nectar-sweet, exempt from time, and not nearly as simple as you may remember." - The New Yorker

"STILL THE BEST... AFTER ALL THESE YEARS!" New York Post

"A LEGEND IN IT'S OWN TIME!" Playbill

"IT TELLS THE SWEETEST POSSIBLE LOVE STORY WITHOUT INSULTING YOUR INTELLIGENCE!" Time Out New York

"AS DELIGHTFUL AS EVER!" Variety