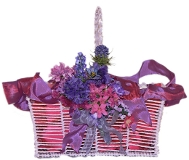 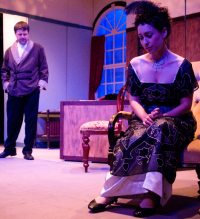 'I want to be a lady in a flower shop stead of selling at the corner of Tottenham Court Road. But they won't take me unless I can talk more genteel. He said he could teach me. Well, here I am ready to pay him--not asking any favor--and he treats me as if I was dirt.'

If ever a play deserved the title 'classic', the first offering of our season is that play! Based on the classical Greek myth, Pygmalion has delighted audiences for generations as it plays on the complex business of human relationships in a class-based Society. When Professor Henry Higgins comes across a poor and uneducated Cockney girl named Eliza Doolittle he makes a bet that he can take Eliza from the gutters of London and pass her off as a society lady, by simply teaching her the right dialect in which to speak. The one thing he overlooks is that his "creation" has a mind of her own. 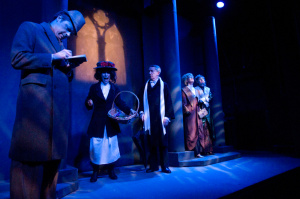 Shaw's brilliant comedy is of course well known as the source of the hit musical My Fair Lady but those who have seen the musical shouldn't assume they know the play. Recently revived to huge acclaim in London by Sir Peter Hall and on Broadway starring Claire Danes, Shaw's incisive wit drives this timeless, utterly charming comedy.

Directed by New Zealand based Director and set designer Owen Gimblett and with sumptuous costuming from Nicola Griggs we invite you to come back to London in 1912 and discover that learning how to speak 'proper' is just one step on the journey to becoming a 'fair lady'.