by Matthew Barber from a novel by Elizabeth von Arnim 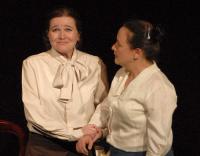 Set in England and Italy in the early 1920's, Enchanted April tells the story of Lotty Wilton, an edgy and nervous middle-aged woman who feels lost and detached from both her marriage and life in general. She persuades an acquaintance Rose Arnott to accompany her to Italy for the month of April to rent a charming villa and enjoy the 'wisteria and sunshine'. As the rent is more than they can afford, they advertise for two companions and get more they they were anticipating. One is the beautiful socialite Caroline Bramble, who is eager to get away from admiring eyes. The second traveller is a crotchety older woman Mrs Graves, who lives in the past with her dead husband and the famous literary scholars that she knew as a child.

This play is about how the women 'find' themselves and reconnect with the world around them through their developing friendships at the magical villa of "San Salvatore". This play is a touching examination of human frailty and strength. However, there are also many moments of comedy due to these four very different people being forced to live together under the care of the down-to-earth Italian housekeeper Costanza, who doesn't speak a word of English.

Enchanted April is an uplifting, whimsical play that audiences will enjoy. Its positive message of hope and happiness gives us all reassurance that better times are on the way.

Everyone deserves a bit of magic in their lives! 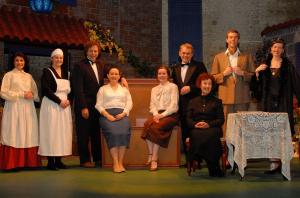