When Mr Dashwood died his considerable estate passed into the hands of John, the son of his first marriage. His second wife and her three daughters had to rely on the good nature and honour of John Dashwood if they were to have more than a modest competence upon which to live. Unfortunately, John Dashwood loved his money much more than he loved his half-sisters. 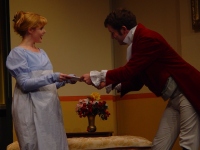 Sense and Sensibility tells the story of the two eldest daughters of Mrs Dashwood - brought up to be young ladies in comfortable circumstances but now reduced to poverty. Elinor Dashwood is the sensible sister who puts others before herself. Marianne Dashwood is full of "sensibility" allowing herself to be ruled by her feelings and caring little for the feelings of others. Lose your heart and come to your senses as you follow the trials and tribulations of these two young ladies. Jane Austen's story of greed and love is as fresh today as it was when first published in 1811.

This is the fourth stage adaptation of a Jane Austen novel that Pamela Whalan has directed for the Genesian Theatre. I Have Five Daughters (the stage version of Pride and Prejudice), Emma and Mansfield Park have all delighted Genesian audiences. Pamela has directed many other plays for this Theatre including The Harp in the South which won the John Pooley Award for 2003. The cast includes faces familiar to Genesian audiences - Joyce Birch, Eric Bicknell, Simone-Marie Dixon, Zara Symes, Debbie Smith, Genevieve Mortiss, Marnie Davidson, Tom Massey, Pat Foley and Manny Said. We welcome newcomers to the Genesian stage Phil and Rhys Cohen.

Sense and Sensibility opens on 4 November 2005 and continues until 17 December at The Genesian Theatre, 420 Kent Street, Sydney.

Friday and Saturday evenings at 8 p.m. Sunday afternoons at 4.30 p.m. 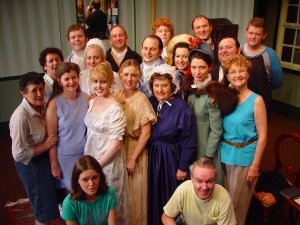