The Harp in the South

Come and meet the Darcy family. There is Mumma, who has maintained an innocence and purity of heart despite living in the mean and dirty streets of the slums; her husband Hughie, a hard working, hard drinking family man; Rowena, the gentle daughter and Dolour the irrepressible one. Then, of course, there is Grandma, the loveable scamp whose enthusiasm for life is undiminished even though her body may be wearing out.

They live at 12˝ Plymouth Street Surry Hills in the late 1940s. There is little money but lots of love and laughter, tears and sorrow in this crowded household.

It has been said that Ireland's greatest export is her people. Grandma migrated from Ireland as a young girl. Hughie is the son of Irish immigrants. The Harp of Ireland plays a different tune in this southern land half a world away but the quality of the instrument remains true as the Irishness of this family adapts to the conditions of Surry Hills.

The Harp in the South won a writing competition held by the Sydney Morning Herald in 1947 and the Darcy family has remained a firm favourite with every generation of Australians since its first publication. Ruth Park collaborated with Leslie Rees to adapt her novel for the stage. The play was first produced at the Independent Theatre, North Sydney in March 1949. It was directed by Doris Fitton. More recently The Harp in the South was made into a successful mini-series for television.

We know that you will enjoy the company of the Darcy family when you meet them during this evening of bittersweet entertainment at the Genesian Theatre, 420 Kent Street, Sydney.

Early booking for this theatrical delight is strongly recommended

Performance Times : Friday and Saturday at 8pm
Sundays at 4.30pm


Ticket Prices $22 and $17
Ask about our 'meal and play' special (not available Sundays)
Bookings MCA ticketing 9645 1611 or online at www.mca-tix.com 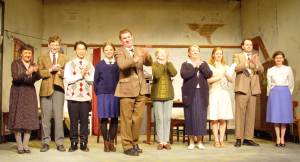