You Can't Take it With You 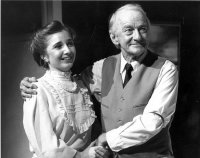 Moss Hart and George S. Kaufman were awarded the Pulitzer Prize for Drama for You Can't Take it With You. In 1936 the show opened at the Booth Theatre, New York, and went on to run for a wonderful two year season.

When the show opened, Brooks Atkinson of the New York Times wrote in his review. "Mr Hart and Mr Kaufman have been more rigidly brilliant in the past, but they have never scooped up an evening of such tickling fun ... They mowed down the audience under a machine gun barrage of low-comedy satire, which was the neatest trick of the season..." 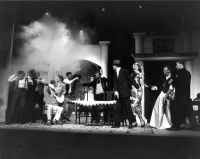 You Can't Take it With You is a comedy and concerns the activites of a most bizarre family headed up by Martin Vanderhof, grandfather, patriarch and legally dead. The rest of the household consists of his daughter, Penny, a sometime painter and writer of unfinished plays; her husband, Paul Sycamore, who manufactures fireworks in the basement with his friend the ice delivbery man, Mr De Pinna, and their daughters, Essie and Alice. Added to this mixture is a larger than life Russian ballet tutor, a couple of very Irish servants, an agent from the Department of Internal Revenue, a former Russian Grand Duchess and a son-in-law who prints lolly wrappers with anarchial propaganda. The plot thickens when the family meets Alice's prospective in-laws (a wealthy and conservative pair) and the resulting confusion and misunderstanding leads to an hilarious, unexpected and somewhat unfortunate ending for some. 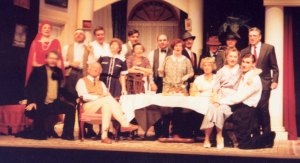