Castle in the Air

Alan Melville was a successful writer of revues in the 1940's He was also a witty playwright and some of his notable successes include "Simon and Laura" and "Dear Charles".

When "Castle in the Air" was first performed it was considered by many to be the best straight comedy written by an expert in the revue sketch with more wit than is reasonable in a single play. The plot centres on the Earl of Locharne who has turned the family castle into a guest hotel, with little success. In need of money he seeks a buyer for the rundown property. Two people with a strong interest in the castle arrive and the struggle for the castle begins.

The play displays Melville's skill for sophisticated wit, sharp repartee and disarming nonsense talk.It is a delightful and engaging comedy and offers perfect entertainment for the start of the New Year 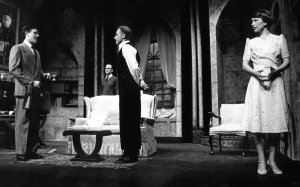